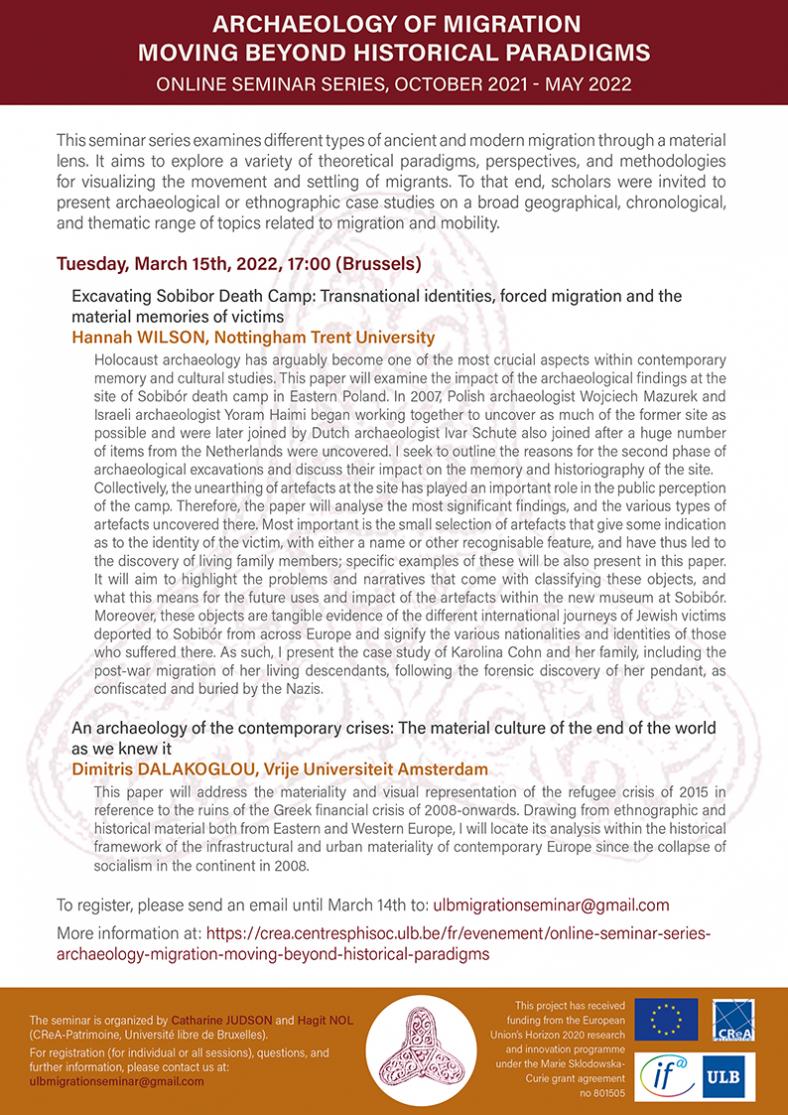 This seminar series examines different types of ancient and modern migration through a material lens. It aims to explore a variety of theoretical paradigms, perspectives, and methodologies for visualizing the movement and settling of migrants. To that end, scholars were invited to present archaeological or ethnographic case studies on a broad geographical, chronological, and thematic range of topics related to migration and mobility.

Holocaust archaeology has arguably become one of the most crucial aspects within contemporary memory and cultural studies. This paper will examine the impact of the archaeological findings at the site of Sobibór death camp in Eastern Poland. In 2007, Polish archaeologist Wojciech Mazurek and Israeli archaeologist Yoram Haimi began working together to uncover as much of the former site as possible and were later joined by Dutch archaeologist Ivar Schute also joined after a huge number of items from the Netherlands were uncovered. I seek to outline the reasons for the second phase of archaeological excavations and discuss their impact on the memory and historiography of the site.

Collectively, the unearthing of artefacts at the site has played an important role in the public perception of the camp. Therefore, the paper will analyse the most significant findings, and the various types of artefacts uncovered there. Most important is the small selection of artefacts that give some indication as to the identity of the victim, with either a name or other recognisable feature, and have thus led to the discovery of living family members; specific examples of these will be also present in this paper. It will aim to highlight the problems and narratives that come with classifying these objects, and what this means for the future uses and impact of the artefacts within the new museum at Sobibór. Moreover, these objects are tangible evidence of the different international journeys of Jewish victims deported to Sobibór from across Europe and signify the various nationalities and identities of those who suffered there. As such, I present the case study of Karolina Cohn and her family, including the post-war migration of her living descendants, following the forensic discovery of her pendant, as confiscated and buried by the Nazis.

An archaeology of the contemporary crises: The material culture of the end of the world as we knew it

This paper will address the materiality and visual representation of the refugee crisis of 2015 in reference to the ruins of the Greek financial crisis of 2008-onwards. Drawing from ethnographic and historical material both from Eastern and Western Europe, I will locate its analysis within the historical framework of the infrastructural and urban materiality of contemporary Europe since the collapse of socialism in the continent in 2008.

To register, please send an email until March 14th to: ulbmigrationseminar@gmail.com