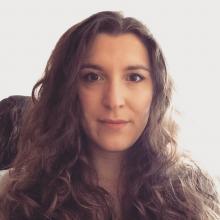 Tzveta Manolova completed her studies at McGill University, Canada (BA double majors in History and Anthropology, MA in Ancient History), after which she pursued a DPhil in Archaeology at the University of Oxford. Her doctoral dissertation, titled “Maritime Infrastructure in the Eastern Mediterranean: A Context-Based Approach to Continuity and Innovation in Nautical Technology (c.1400-700 B.C.)” offers a comprehensive study of ancient ships and nautical technology that charts regional traditions and trans-regional patterns from a longue durée perspective, integrating representational, textual and shipwreck evidence. Her field of research focuses on maritime networks, maritime infrastructure and nautical technology spanning the Late Bronze and Early Iron Age periods, as well as the coastal Levantine city-states of the Phoenician homeland. She is currently a Wiener-Anspach Postdoctoral Fellow at CReA-Patrimoine, ULB since September 2020.
Dr Manolova has excavated at a number of sites in Bulgaria (Kabyle, Sveshtari, Velingrad, Ahtopol) and Cyprus (Hala Sultan Tekke). She has been the recipient of various fellowships and awards (FQRSC and SSHRC Master’s Scholarships, Clarendon Fund and SSHRC Doctoral Scholarships, Wiener-Anspach Postdoctoral Fellowship) and has given conference papers at academic institutions across Europe and North America. She has also taught classes on a range of Late Bronze and Early Iron Age topics, including on Greek mythology, Homeric Archaeology and Early Greece (1550-700), and Greeks and the Mediterranean (950-500).

The main component of the project consists in the creation of an up-to-date online database of ancient ship representations following the general model of an online museum catalogue, with an emphasis on accessibility to both specialists and students as well as a broader general audience. It will be comprised of a comprehensive catalogue of all known ship representations of the Late Bronze and Early Iron Age Periods found in the Eastern Mediterranean, with an advanced search engine tailored to the subject by including specifically technical nautical aspects in addition to more general selection criteria. The primary aim of the project is to present ship representations as cultural artefacts, with catalogue entries providing the broader archaeological context, medium and visual impact of the objects in addition to the technical aspect of the ships. Users will also benefit from high-definition drawings and photographs (in most cases previously unavailable), including 3D photographs for complex objects in order to promote remote detailed study. Finally, an interactive map of the Mediterranean will allow users to examine distributions in time and space, with additional features down the line such as currents, winds, coastal visibility and major landmarks. The project is meant to pay homage to and expand upon the legacy and work of Lucien Basch, whose magisterial book Le musée imaginaire de la marine antique remains the largest synthetic work on the subject in print.

The research component of the project builds upon my doctoral work to explore the interrelated topic of artificial harbours. One of the main patterns to emerge from my research is the centrality of the Levantine nautical tradition as the driving force of technological innovation over the Late Bronze- Early Iron Age time period, being the source of virtually all game-changing developments that fundamentally shaped Mediterranean seafaring during antiquity. The current phase of my research aims to expand from my insights on ships with an examination of harbour installations to provide a holistic reconstruction of maritime infrastructure. The location of the earliest artificial harbour structures in the same region provides a strong case for the need of an integrated approach, suggesting that advances within these two spheres were closely interrelated. Ancient sources and modern scholarship alike converge on the notion of the Phoenician city-states as hallmarks of an unusually pronounced maritime orientation. This specialisation, however, is rarely defined from the point of view of the physical setting and maritime infrastructure which brought it about, with ships and harbours relegated to the role of invisible conveyors and conduits. The inherently adaptable nature and ability of maritime agents to navigate across boundaries, customs, and modes of communication means that some of the traditional archaeological means to investigate collective identity and cultural boundaries may be less effective in the case of the Phoenician city-states. An alternate approach focused on nautical traditions and infrastructure provides room to accommodate the plurality of material culture and practices highlighted by critics while at the same time charting deep and enduring mental idioms, approaches and adaptations to the maritime sphere which were peculiar to the north-central Levantine region as a collective.

2019. “The Levant,” in I.S Lemos and A. Kotsonas (eds.) A Companion to the Archaeology of early Greece and the Mediterranean. Blackwell Companions to the Ancient World. Wiley Blackwell, pp. 1185-1214.