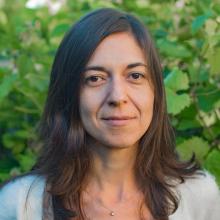 Vivi Saripanidi studied at the Aristotle University of Thessaloniki (BA in History and Archaeology, MA and PhD in Classical Archaeology) and the Johns Hopkins University, Baltimore (MA in Classics). Her doctoral dissertation, which is entitled “Imported and Local Pottery in Northern Greece. The Case of Sindos”, examines the ceramic finds from the graves at the south cemetery of ancient Sindos, near Thessaloniki. Apart from their typological study, it further analyzes the evidence they provide on the funerary rituals practiced at Sindos, as well as on the sociopolitical, economic and cultural background of the local community. This work was published in 2016, as part of the complete publication of the site by the Archaeological Society at Athens.
Dr Saripanidi has participated in several excavations (Pella, Corfu, Dymokastro in Thesprotia, Dodona, Itanos on Crete) and she has worked as contract archaeologist for the Greek Archaeological Service. Since 2001, she has been a member of the research team excavating the ancient settlement at Karabournaki, in Thessaloniki (project of the Department of History and Archaeology of the Aristotle University of Thessaloniki). In the frame of this project, she has trained systematically students in in pottery analysis and she has been assigned with the publication of the local ceramic wares from the Early Iron, the Archaic and Classical periods.
During and after her studies, Dr Saripanidi received various fellowships and awards (Greek State Scholarships Foundation, Foundation Propondis, Research Committee of the Aristotle University of Thessaloniki, Fondation Wiener-Anspach) and she has been invited to give lectures and conference papers at numerous academic institutions in Europe and the USA. Since October 2013, she has been based at the CReA-Patrimoine, ULB, where she has held several positions (Fondation Wiener-Anspach Postdoctoral Fellow, Chargée de recherches F.R.S – FNRS, Scientific Collaborator F.R.S.-FNRS). Since October 2020 she is Research associate F.R.S.-FNRS.

Beyond the polis. Collective practices and the construction of social identities in Early Iron Age and Archaic Greece

In the frame of my participation in this project, I produced, among other works, an article under the title “Constructing Continuities with a ‘Heroic’ Past. Death, Feasting and Political Ideology in the Archaic Macedonian Kingdom”. In this article I begin with the comparative analysis of the evidence from a series of archaic cemeteries that have come to light in the northern Aegean and can be associated with colonial Greek, Thracian or Macedonian populations. By examining mainly the modes of consumption of grave goods among the respective communities, I show that, in contrast to what has been held in the past, each of these three broad population groups can be connected with a distinctive set of funerary practices. Focusing then on the Macedonian kingdom, I demonstrate that around 570 BC the Macedonian funerary rituals underwent a profound transformation, which affected all burials and entailed, among other things, the appearance of excessively wealthy graves. This transformation, which can be observed particularly with regard to grave goods, involved the incorporation, into a single symbolic system, of forms and practices that were drawn upon different traditions and periods: upon the local Macedonian tradition; the southern and eastern Greek world of the 6th c. BC; and the Greek world of the Postpalatial period and the Early Iron Age. I finally argue that this funerary transformation aimed to promote a new political ideology that was forged after the first Macedonian territorial expansion to the east of the River Axios, which must have taken place already in that period.

The research I performed in the frame of this project has led to the creation of a new project, which aims to investigate the processes of formation of the Temenid Macedonian kingdom and its sociopolitical organization until the rise of Philip II. Combining a bottom-up contextual analysis of the archaeological evidence with theoretical approaches of sociopolitical complexity and state formation, this new project involves the comparative study of a series of Macedonian burial sites that date from the 7th to the 4th c. BC. The questions pursued by means of this comparative study pertain: first, to the precise time and the processes of the formation of the first supra-local polity in Lower Macedonia; second, the modes of production of political power and the modes of distribution of such power within and among the Macedonian communities; third, changes in these aspects over time; and fourth, the possible relationship between the Macedonian sociopolitical developments and cross-cultural interactions within and beyond the northern Aegean. In the absence of extensive archaeological evidence from Macedonian settlements from the Archaic and Classical periods, my analysis relies primarily on the funerary record. Taking into account the limitations imposed by the nature of this evidence, it aims to create a preliminary scenario that will be eventually tested on the one hand, against the existing literary, epigraphic and numismatic sources on the history of the kingdom; and on the other hand, against material evidence from Macedonian settlements that will become available in the future.

My research in the field of pottery addresses the production of several regions of the ancient Greek world and its fringes. I have published the Corinthian, East Greek, Attic, Boeotian, Euboean and local pottery from the archaic-classical cemetery of ancient Sindos, near Thessaloniki, and the vase collection of the Cast Museum of the Aristotle University of Thessaloniki. The latter collection includes pieces that originate from various regions of the Aegean and date from the Late Bronze Age to the Early Hellenistic period. Furthermore, I am currently studying for publication the local pottery from the Early Iron Age, the Archaic and Classical periods that has come to light at the settlement at Karabournaki (ancient Therme), in Thessaloniki. Being interested in both shapes and their decoration, I have performed formal and iconographic analyses of some of the most common ceramic types that are known from the Aegean and more broadly from the Mediterranean (e.g. I have established a typological scheme for the Corinthian exaleiptron and I have discussed the late black-figure scenes that decorate the ubiquitous vases from the Workshop of the Haimon Painter). At the same time, I have been particularly committed to the study of pottery production from the northern Aegean, systematic research on which has only begun in the past few decades. My work on the pottery from his particular region tackles various issues that are related to: technology and standardization; influences that originate from southern and eastern Greece, from the central Balkans and Anatolia, as well as the modes of their transmission; regional workshops, the diffusion of their products and their interactions; and the practical and ideological functions of pottery within settlement and ritual contexts.
In the frame of my research on the archaic necropoleis of the northern Aegean, I have been particularly interested in the funerary functions of pottery (whether local or imported) and vases made of other materials. By analyzing the patterns of consumption of vessels within specific sites, I have been able to test traditional interpretations and to argue against automatic assumptions, such as the one that the shape of the phiale was always associated with the pouring of libations; or the one that the iconography of any given figured vase offered to a grave had to correspond to some aspect of the social identity of the tomb owner. Perhaps more importantly, this analysis has revealed differences in the ways in which the various populations of the north used particular shapes. During the Archaic period, for instance, the shape of the krater appears among offerings in Macedonian graves but it is completely absent from graves inventories at colonial Greek and Thracian cemeteries; however, in the case of colonial sites, it occurs among deposits of pottery fragments that come to light in the space between graves and attest to post-burial commemorative rites. In all, while my work on pottery involves both typological and contextual studies, it is primarily oriented toward the investigation of social practices, whether these are related to the production of vases or to the diffusion and consumption of such artifacts.

Beyond the polis. Collective practices and the construction of social identities in Early Iron Age and Archaic Greece